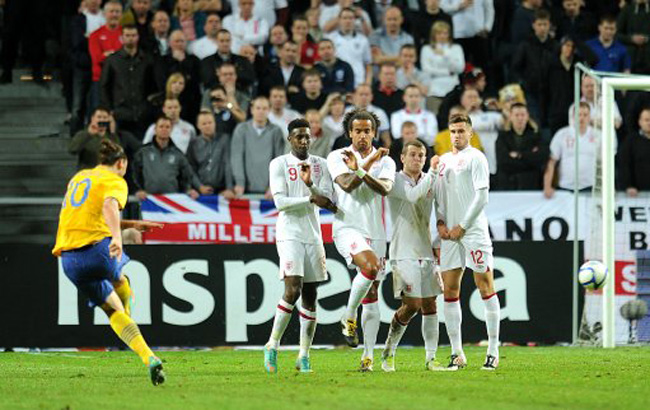 Played in eerie silence under the closed roof of the new Friends Arena in Stockholm, Roy Hodgson’s mix of new and old were ultimately put to the sword by that shrinking Swedish violet Zlatan Ibrahimovic.

The PSG megastar scored all four of Sweden’s goals, including a quite magnificent volleyed-lob thing from 35 yards which  was the icing on the cake of a superb individual performance.

With Stevie G earning his 100th cap and Leon getting his first, the Three Lions started brightly but fell behind on 20 minutes to Zlatan. However, Manchester United’s Danny Welbeck levelled the scores on 35 minutes before Tottenham’s Steven Caulker prodded England ahead three minutes later.

With Carl Jenkinson and Ryan Shawcross making their England debuts courtesy of cameo appearances on 74 minutes, the visitors looked comfortable enough. But then Ibrahimovic volleyed home from inside the box before putting the Swedes ahead on 84 minutes with a free-kick that Joe Hart really should have saved. And then, at the death, Hart blundered again, failing to adequately clear the ball with his head, leaving the Swedish captain to somehow manage to bicycle kick the ball back over the England goalkeeper, from over 30 yards, and into the back of the net.

With Raheem Sterling getting his first taste of international football and Wilfried Zaha also getting on at the end, Hodgson and his charges can take a lot from the game. However, the start of the show was the irrepressible Ibra.