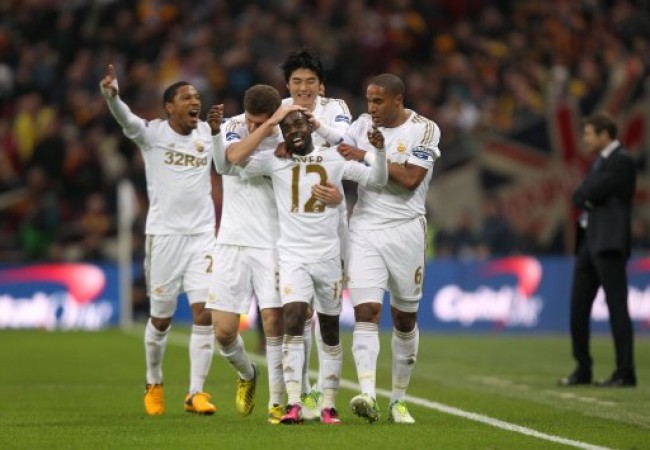 League Two Bradford have enjoyed an incredible giant-slaying Capital One Cup campaign, but against Swansea in the final on Sunday, they were given a lesson in football by Michael Laudrup’s classy Swansea side.

So one-sided was this game, that the Bantams didn’t even muster a shot of any kind until the last few minutes as Swansea strolled their way through the game.

An early goal from Nathan Dyer inflicted on Bradford their worst possible start, with another from Michu giving the Premier League side a 2-0 lead at the break.

Dyer got his second of the game before a brace from Jonathan De Guzman (one from the penalty spot and one at the death) gave the Swans a deserved 5-0 win. The Dutch international’s spot-kick came after goalkeeper Matt Duke received his marching orders from pulling down De Guzman in the box. While it also created the only negative incident for Swansea in the whole game, with Dyer, on a hat-trick, arguing with De Guzman over who should take the penalty.

This really was a stroll in the park for the Swans who won their first major trophy in their centenary year, which is nice! Also, the manner of their victory will surely give Arsenal and Aston Villa, amongst others, food for thought.

As for Phil Parkinson and Bradford, they have created some rather fine history for their club that’ll never be forgotten.