The year was 2001 and League Two side Wycombe Wanderers, into the FA Cup quarter-finals having beaten Wimbledon on penalties in the previous round, were up against Leicester City of the Premier League in the last 8 – though they were heading into the game in the unenviable position of being without any fit-for-purpose forwards.

Stuck for a striker, manager Lawrie Sanchez put a desperate advert on Ceefax (ask your Dads) for a non-cup-tied frontman – an advert which was to be answered by Northern Irish non-league journeyman Roy Essandoh, after the unknown 25-year-old free agent was tipped-off by his agent.

Having signed a two-week contract with Wycombe ahead of the tie, Essandoh started the Leicester game on the bench, but was bought on for the second half.

With roughly ten minutes left and the score locked at 1-1, Wycombe manager Sanchez found himself sent to the stands for aiming an irate torrent of abuse at the linesman over a rejected penalty claim.

Without a manager on the touchline and with injury time fast wicking away, a long ugly ball was slung into the Foxes box. See if you can guess what happened next…

Sadly, that was where Wycombe’s fairytale ended, fighting tooth and nail before eventually going down 2-1 against Liverpool in the semi-finals.

That goal against Leicester was Essandoh’s only goal for The Blues, who renewed the striker’s weekly contract long enough for him to make 12 further appearances before he was released with his name forever etched in the club’s – and the FA Cup’s – folklore. 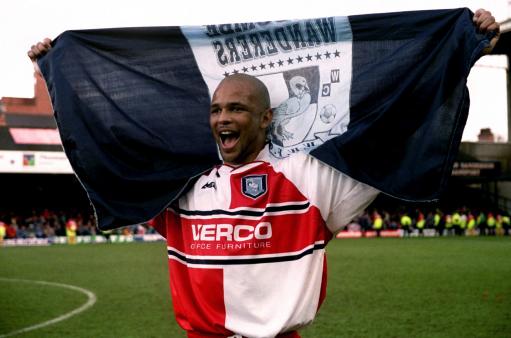