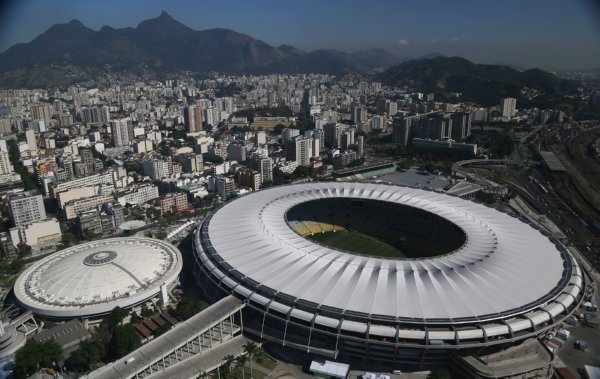 First things first, the most refreshing thing so far about this year’s Confederations Cup has been that every team that entered – even those who failed to make the semi-final cut –  played as though they wanted to win it.

So far each manager has by and large fielded their best available XI and many teams have given it their all in each match. There have been some blinding goals (with a healthy dash of superb freekicks), world class performances and genuinely euphoric moments of joy and adulation.

Nearly every match has been engaging and played in the most professional manner. Maybe it’s because the stakes aren’t as high as with a World Cup, etc, but there have been no cynically defensive “Greece” tactics – just eight teams playing as openly and expansively as possible. In fact, barring the odd infuriating refereeing decision, the 2013 Confederations Cup has been a thoroughly enjoyable tournament so far.

Sadly, we can’t really press on without mentioning the ongoing friction outside the stadiums, with many matches being fringed by protests, violence and ructions breaking out on the streets just below the shiny FIFA veneer. Riots have erupted around Brazil in protest over the government siphoning vast amounts of money into the 2014 World Cup rather than into public services – you can’t help but empathise.

From the moment Neymar’s foot connected with that sweet half-volley in the opening game against Japan, you just knew that he was about to step up to the “poster boy” mantle and have an indomitable effect on this tournament. When the ball crashed into the top corner of Eiji Kawashima’s net after three minutes, both the ecstasy and the release of tension was palpable as the Estadio Nacional applauded.

Pundits and fans alike had raised concerns about the quality of this Brazilian team and whether Neymar would live up to his star billing. Well, three games in, three wins and three world class goals from their fleet-footed No.10 have seen this Brazilian side win back the hearts of the nation and, moreover, the footballing world at large. Flawed as they may still be, we have been convinced that we’re looking at a proper Selecao here.

Easily storming through the group, Brazil have given us some solid performances with many an individual impressing. Apart from the omnipresent Neymar, others like Paulinho, Marcelo, Oscar, Thiago Silva, David Luiz, Fred and even two-goal Jo (yeah, I said it!) have shown there is more than just the one bright light in this squad. 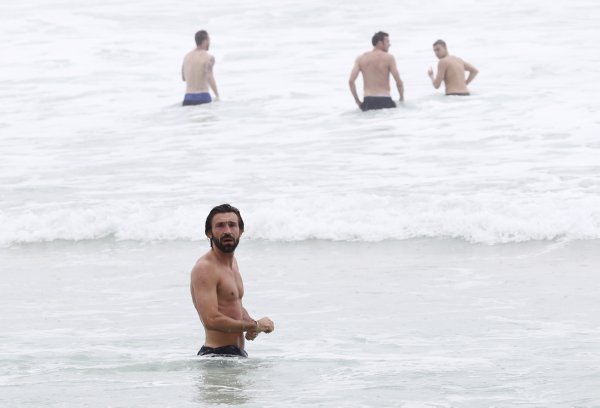 Elsewhere in the group Italy have proven to be good value for the neutral money. Goals galore and some cracking matches have made the Azzurri arguably the most entertaining team at the tournament, with an in-built frailty adding to the drama at times.

A hard fought 2-1 victory over Mexico in their first game has been their best performance – a game which saw sultry deep-lying pass vixen Andrea Pirlo arch a beautiful freekick into the Mexican goal on his 100th appearance for Italy in Brazil’s temple of football, the Maracana. “Il Metronomo” is unlikely to forget that moment any time soon.

Outside of their opening game, Italy haven’t been quite so resolute. Their 4-3 win against Japan was undoubtedly the game of the tournament but the Azzurri were less than impressive when it came to the basics. Slack passing, sloppy defensive positioning and mistakes galore by the usually ultra-dependable Gianluigi Buffon left Italy scrabbling to see of a slick Japanese outfit, with the skins-of-teethes victory proving enough to lodge Gigi and co. in second place in the group standings.

A word of praise should go to Mario Balotelli, who has led the line with maturity and conviction, and to promising left-back Mattia “The New Maldini” De Sciglio, who hasn’t looked stymied by the weight of his incredibly illustrious nickname. 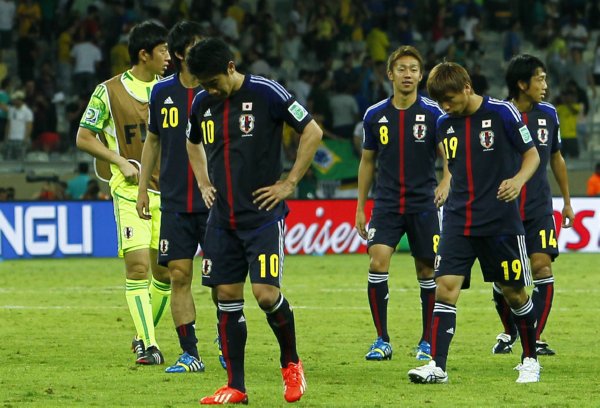 A quick mention should go the Japan who, even having lost every game, have impressed in spades. They really are unlucky to be going home without a point to their name. A tidy midfield with some tight passing triangles provided some wonderful passages of play, but ultimately a telling lack of genuine firepower “up top” proved to be their undoing.

The most surprising thing about Group A was the poor performances of Mexico. After the success of the Olympics, we were looking forward to seeing a host of their younger talents on display. Not only did many of the younger crop fail to turn up, the rest of the team looked flat and many of the more senior players woefully under-performed – save Gio Dos Santos, who beavered away dutifully without an awful lot in the way of assistance from his El Tri teammates.

A languid and defensive style saw them easily overturned by Brazil and Italy. Their 2-1 win over Japan was the only positive thing “La Verde” could take from this trip. 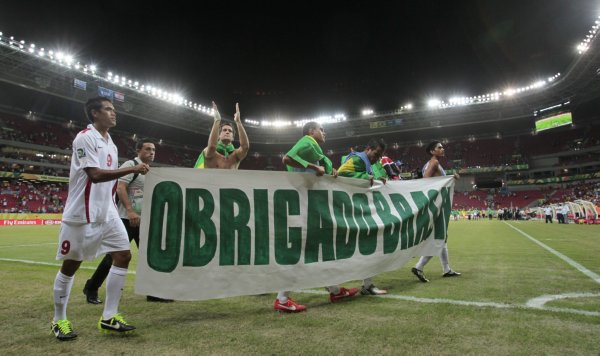 Fun fact courtesy of Opta: Tahiti (with 77.5%) averaged a higher passing accuracy at the 2013 Confederations Cup than Uruguay (75.4%) in their opening two games

Group B has been all about one team. No, not Spain, little Tahiti. Sure, they haven’t won a single match and have been hopelessly outmatched by each of their opponents, but there is something just so gosh-darn endearing about these Pacific island minnows – something that has won over the entire watching world.

Perhaps it’s their pre-game presents, their never say die attitude, the fact that they were always willing to get forward and attack whatever the scoreline, or maybe its the simple fact that they – given their amateur status – are basically just like you or me, save for that fact that these regular Tahitian schmoes have spent their  summer playing international tournament football against Spain and Uruguay.

They were adamant that they were going to wholeheartedly enjoy their time in the sun and do their nation proud in the process. Done and done. Rarely will you ever see a team on the smelly end of a 10-0 defeat get a standing ovation from an entire stadium, but that’s what happened after their Spanish drubbing.

Dullard pundits like Martin Keown and Kenny Cunningham will try to persuade you that teams like Tahiti will damage the quality of these competitions and have no real right to be here. To them, I say look at the happiness etched across those men’s faces after Jonathan Tehau headed home against Nigeria. Never has a consolation goal been greeted with so much unbridled jubilation. Tahiti have proved that whatever the morose, workaday ex-professionals may think, you can still have fun playing your football.

Well done Tahiti, you injected a bit of soul back into the game. 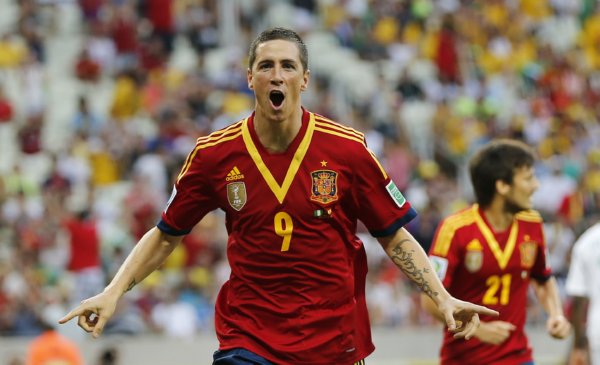 At the opposite end of the pile, Spain have cruised this group – barely getting out of second gear and finishing with a 100% win record. In all honesty, the omni-champions haven’t broken sweat despite racking up routine victories against Uruguay, Tahiti and Nigeria.

Roberto Soldado was given the task of leading the Spanish front line from the off but it’s Fernando Torres who has been grabbing the headlines – with the Chelsea striker on course for his second successive tournament golden boot trophy. Sure, four of his five goals came against Tahiti, but he did manage to score a cracking diving header against Nigeria last night and seems to be relishing playing as a straightforward No. 9 again, rather than the line-leading dogsbody role he plays under great pressure for his club.

Beyond Torres, Andres Iniesta has been conjuring his usual moments of wizardry and both Pedro and Jordi Alba have been providing the Spanish team with an intravenous pep of overlapping pace. Alba’s two goals against Nigeria proving that even the Spain left-back is a constant goal threat.

Washing up in second in Group B were Uruguay. Even though they qualified for the semi-finals, Uruguay have looked surprisingly flat with Edison Cavani and Luis Suarez looking understandably exhausted after carrying their respective club sides for the past couple of seasons.

Indeed, La Celeste have been reliant on their creaky experience to pull them through, with an older-than-average squad looking a little on the average side up to this point despite the supposedly £multi-million’s worth of attacking talent they have at their disposal.

Nigeria on the other hand can consider themselves unlucky to be going home early. This young team have given it a real go in Brazil. Players like Ahmed Musa, Sunday Mba and Chelsea’s John Obi Mikel have show real grit and determination in midfield, with Mikel even scoring a nifty goal against Uruguay. No matter how many times you say that out loud to yourself, it still doesn’t sound quite right!

Perhaps with a few more experienced players in this team, along with a decent finisher, they may have gone further? Who knows?

So, with the group stages now over its’ quickly on to the semis, in which we’re being treated to some delicious-looking games in prospect.

First up is a fiery South American derby on Wednesday evening between Brazil and Uruguay, while Thursday sees a repeat of the 2012 Euro final with Italy looking to eek out revenge on Spain.

While it’s not set in stone, you’d have to go a long way to convince that we’re going to be seeing anything other than a headline act of Brazil vs Spain in the final come Sunday.