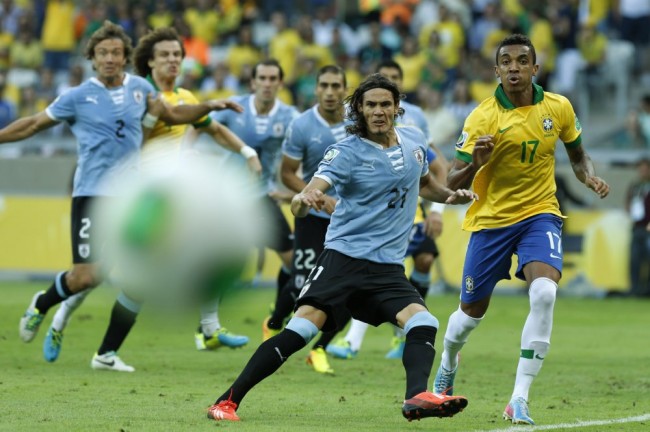 “WHAT THE HELL IS THAT THING?”

Now, we all know that Brazil are a proud nation but rarely has a country shown commitment to its values quite like those amassed in Belo Horizonte did on Wednesday. With thousands of protesters again clashing with police in the streets outside the Estadio Mineirao, supporters, citizens and professional footballers alike belted out their national anthem, Hino Nacional Brasileiro, in cacophonous unison like their lives depended on it.

With the unrest that has enveloped the 2013 Confederations Cup, the pre-game formalities has taken on extra significance, with entire stadiums-full of Brazilians roaring on past the end of the backing track to finish their anthem a capella – providing some truly special, goosebump-raising moments as a people defy their government; the lies, the corruption, the fatuous overspending; and invest their collective heart in their Selecao.

It may just be the film buff in me, but flashbacks to the “La Marseillaise” scene in Casablanca abound.

You could have forgiven Uruguay for being a little flustered by the magnitude of the first semi-final and its national importance but fortunately it was La Celeste who got off to the better start, though that was largely by default as Brazil came out of the traps in a weary, half-cut stagger rather than a canter. 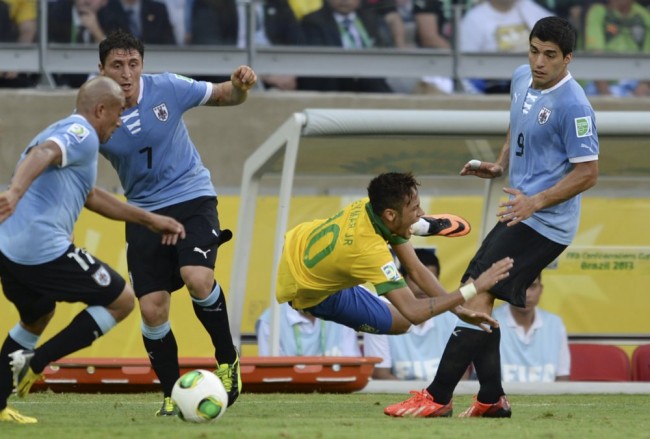 If Luis Suarez is taken aback by your diving, you know you probably need to have a word with yourself

Unlike their group stage matches which almost all started with fireworks in the first few minutes, Big Phil’s charges began the game in a flat torpor, looking utterly uninspired and struggling to create any real openings of note – constantly surrendering possession and giving Uruguay precisely nothing to worry about for the first half-hour.  Why, even Brazil’s flimsy Boy Wonder failed to make any jinky inroads, looking out of sorts and devoid of inspiration.

Uruguay toiled away, pressing and harrying, and eventually their hard work paid dividends, when they won a penalty 15 minutes in when David Luiz swung Diego Lugano around by his collar in the box amid the usual pre-corner jostling.

Diego Forlan assumed responsibility for the spot-kick and had to wait a long time before he could strike the ball, giving Julio Cesar a little “don’t worry, I got this” grin that would swiftly come back to bit him in the backside. Indeed, Forlan was left to rue to the delay when his low penalty was expertly repelled by the QPR ‘keeper – not bad for a boy from the English second tier! 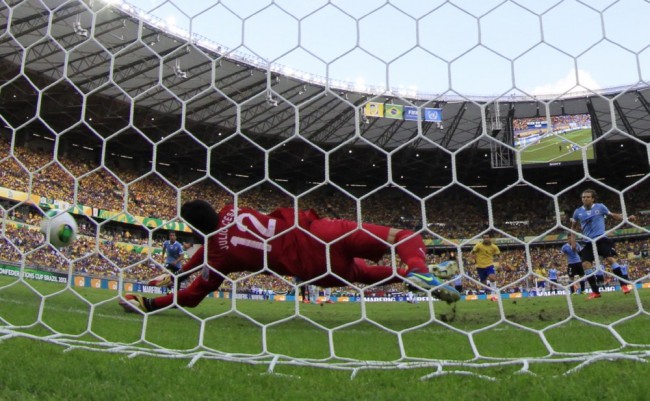 He came, he saw and he guessed right

Forlan’s profligacy would eventually come back to haunt Uruguay. A fairly pedestrian first half looked to be heading for a half-time stalemate as the interval approached but, with but a few minutes left to wick away, Neymar finally farted into life, pulling Paulinho’s long, high ball into the box out of the sky and attempting to poke a chip past Fernando Muslera in the same slick action.

Neymar’s nudge was saved by Muslera but the Uruguayan ‘keeper was unable to prevent it from falling to Fred, who unleashed a devastating “scissor shank” off the bottom corner of his shinpad which trundled over the crowded goal-line and put Brazil into a largely undeserved 1-0 lead. That’s three in four at the Confeds for Fred so far, who we believe takes his nickname from the single most annoying thing on Youtube.

The second half began amid reports of tear gas being deployed outside the stadium, though it looked for all the world like the fumes may have eked their way into the Brazilian dressing room as the Selecao, once again, started poorly, with more dutiful pressing from Uruguay leading to a 47th-minute goal from supposed Chelsea target Edinson Cavani.

It went down rather well… 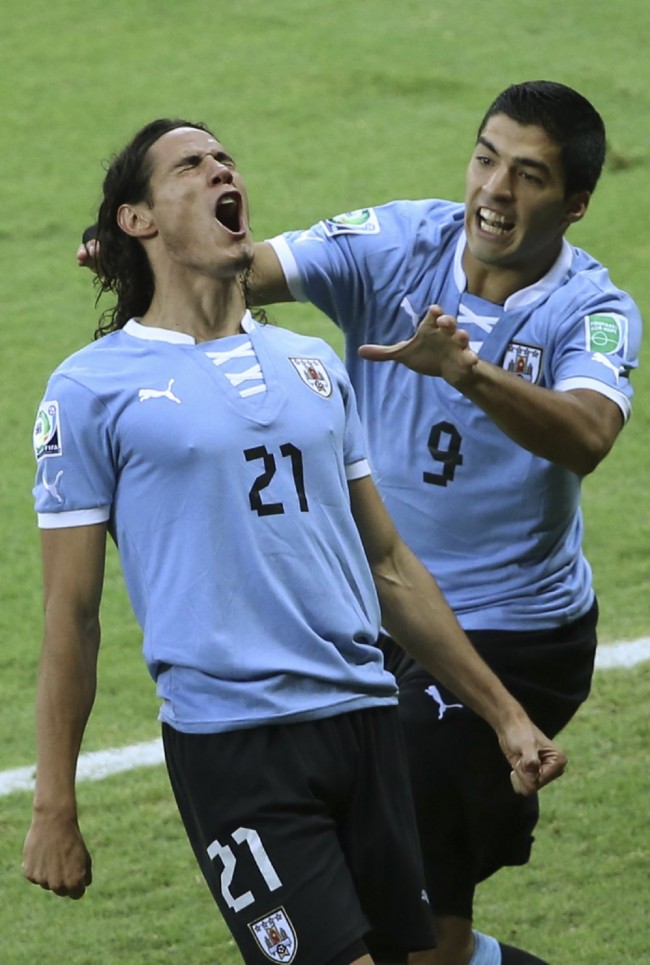 “FETCH ME MY SHAMPOO AND CONDITIONER!!!!!”

A spate of scrappy defending and a few awful attempts at clearing the ball saw the £50million forward steal the it off the toe of Luis Gustavo before burying a finish across Cesar to level the scores – a goal to cap a superbly disciplined defensive performance from Cavani, who operated as an auxiliary right-back for the majority of the evening, even executing an Alessandro Nesta-quality sliding tackle on Marcelo in the Uruguayan penalty area.

Up until the 80th minute that was about all she wrote. The game was fragmented and bitty, diving became endemic and Brazil, specifically Hulk, failed to get the ball under control for the majority of the half. A few choice injections of attacking endeavour came courtesy of Scolari’s substitutes, local boy Bernard and Lazio’s Hernanes, but Uruguay defended with purpose, with Diego Godin coming to the fore as La Celeste kept the home side at bay manfully. 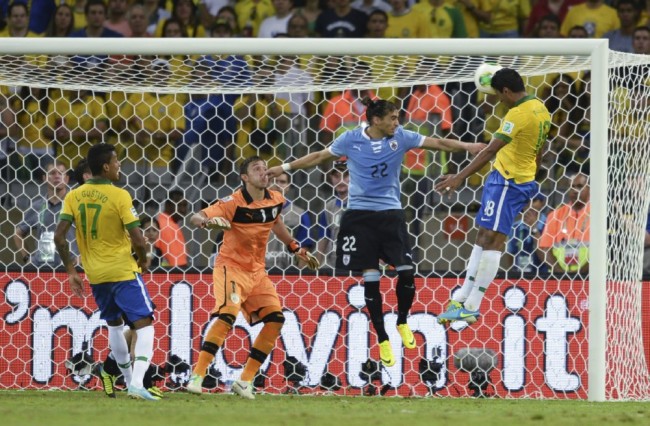 Paulinho leaps with the legs of a salmon

Despite Uruguay’s resolute wall of blue, Brazil, as it was written in the script, would have the last say with just three minutes of normal time left to play as Tottenham-bound midfielder Paulinho (who hasn’t put a foot wrong all tournament) rose above everybody at the back post and powerfully headed home from a Neymar corner to notch his second goal of the Confeds with a skittish Muslera stranded in no-man’s land.

And, bada-boom-bada-bing, that’s how it finished. Imperfect and gritty as Brazil’s performance was, Paulinho’s late rally proved to be enough for the hosts to muscle their way into the final on Sunday where Spain will no doubt lie in wait.