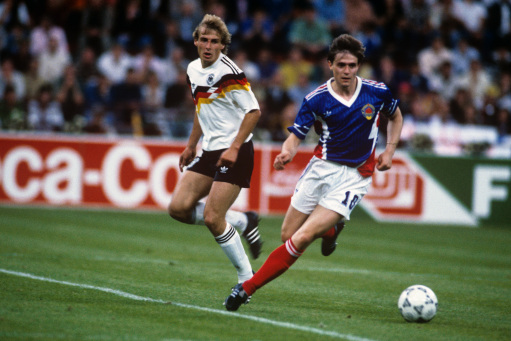 As the Left Back In The Changing Room blog once so rightly ordained, Dragan Stojkovic – like Matt Le Tissier – was one of those players who just wouldn’t be allowed to work these days.

Stojkovic had little use for regimented tactics and routinely struggled to maintain his fitness, but what he did possess was a consummate touch, a playful technique and desire to entertain himself. He played with an arrogant flourish, the kind of individuality that is usually quickly shackled and stymied by overbearing coaching in the modern game.

Sadly from our perspective, Stojkovic never established himself in Western Europe, with his big 1990 move to Marseille petering out early (despite him going on to stay there for four years) due to multiple injuries, with the Yugoslavian midfielder doing all his best work in his homeland for Red Star Belgrade, for his national side and in Japan with Nagoya Grampus Eight.

Boy, did that guy know how, when and where to deploy a backheel…

There’s more if you want it…