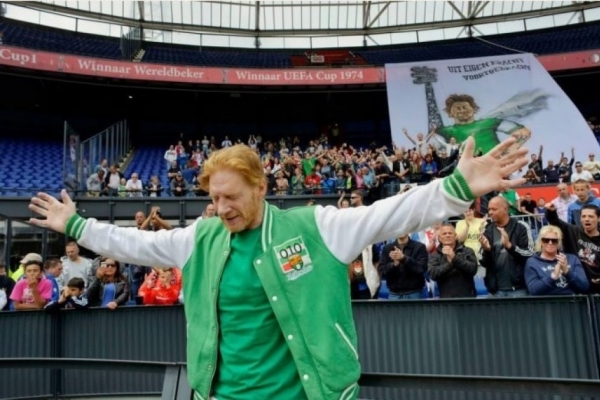 Having been told he had terminal cancer and just days to live, the last wish of 54-year-old lifelong Feyenoord fan “Rooie Marck” (Red Mark) was to attend the Dutch club’s first training session of the season.

Fans of the club traditionally turn out in decent numbers to watch the session held annually at De Kuip, though 2013’s vintage was just that little bit more emotional as Feyenoord supporters and ultras turning out in their thousands to help make Mark’s day as special as possible.

With his illness leaving him too weak to walk, Mark’s friends made arrangements with the club for him to bought out onto the pitch in his hospital bed, while the Feyenoord fans chanted his name, gave him a banner salute, lit red flares and serenaded him with a powerful rendition of “You’ll Never Walk Alone” before he met and shook hands with all the players.

This is a tear-jerker…

Oh dear, our eyes are sweating a bit after that one.

Sadly, Mark died just three days after this footage was taken, though he went out in formidable style – and his funeral procession through the streets of the city was bloody impressive too.