Here’s a corking bit of footballing miscellany with footage from the 1993 Evening Standard London 5-a-sides tournament, which saw professional clubs from in and around the capital – we’re talking Watford, Millwall, West Ham, Brentford, Chelsea, Leyton Orient, Tottenham, Charlton, Crystal Palace, Wimbledon, Barnet, Fulham, QPR and Luton Town – all putting out five-a-side teams made up of first-team/fringe players and squaring off against each other at Wembley Arena, and all before the actual football season had technically finished.

The whole thing was televised on Thames TV and presented by John Salako (who was playing for Palace at the time), with commentary provided by none other than Peter Brackley…

Here’s a copy of the programme… 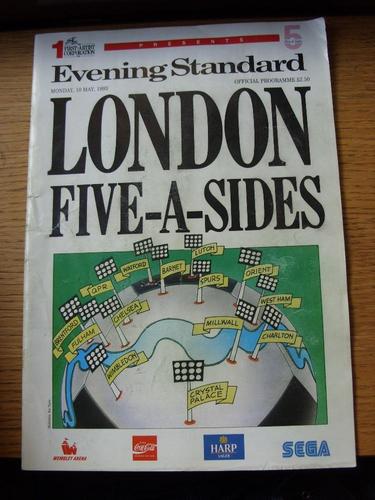 For the record, Watford beat Wimbledon (who named the likes of Warren Barton, Robbie Earle and Vincent Jones in their side) on penalties in the final – possibly the last thing the Hornets won.

The tournament was a yearly event throughout the late 1970s, 80s and early 90s – though after Wycombe Wanderers were allowed to enter and duly won it, the organisers felt things were getting just a little bit silly and put the competition out of its misery in 1995.