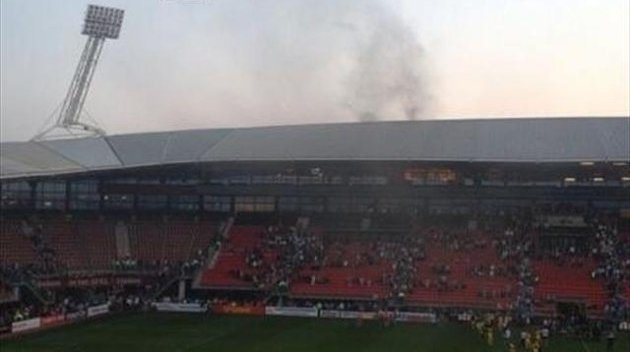 Last night’s Europa League tie between AZ Alkmaar and Atromitos had to be abandoned after 59 minutes after a column of dark smoke was seen rising from the roof of one of the stands at the Dutch club’s AFAS Stadium.

Eurosport are reporting that the “technical fire” (apparently started by a short circuit in the floodlight wiring) first sparked in the roof cavity but soon spread to the upper floors of the stand. Thankfully, the stadium was evacuated quickly and efficiently and nobody was injured.

AZ were 1-0 down and reduced to 10 men at the moment the game was stopped, though they were still 3-2 up on aggregate.

UEFA have since confirmed that the game will continue from the 59-minute mark – with AZ both a goal and a man down – this morning (Friday) at 10:00 BST so it finishes before the Europa League group stage draw takes place, with spectators perfectly welcome to attend the match for free if they can produce a valid ticket for last night’s game.