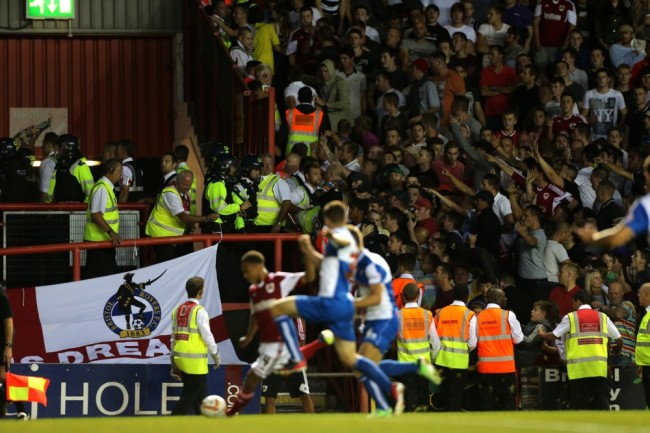 Six year’s worth of pent-up tension was released at Ashton Gate last night after Bristol City beat Bristol Rovers 2-1 in the Johnstone’s Paint Trophy in the first game between the two dear beloved neighbours since February of 2007 (when Rickie Lambert scored the only goal in a 1-0 win for The Gas).

Two plum dandy goals from Jay Emmanuel-Thomas and Joe Bryan proved the difference as City took the bragging rights, but predictably ugly scenes descended at the final whistle when hordes of Robins fans teemed onto the pitch and ran over to the away end in order to goad the traveling Rovers fans. It’s also being reported this morning that seats were torn up and hurled down onto the pitch.

Riot police and horses were soon dispatched and several officers are reported to have been injured in and around the ground while attempting to disperse sparring factions of fans – 12 of whom were arrested over the course of the evening.

Both managers were quick to berate their fans’ behaviour, with City boss Sean O’Driscoll lamenting that the post-match stupidity had “taken the shine off” his side’s victory, while his Rovers counterpart, John Ward, was left baffled by the behaviour of the Bristolian supporters.

“Why you can’t behave at a football match is beyond me,” Ward told BBC Radio Bristol. “Sean doesn’t want it; I don’t want it. We said it before the game. Why don’t people listen?”

“I’m not a Bristolian but I’m an honorary one. I think it’s a great place to be and when people spoil it like that it hurts me as if I was born and raised here. I’m really disappointed.”