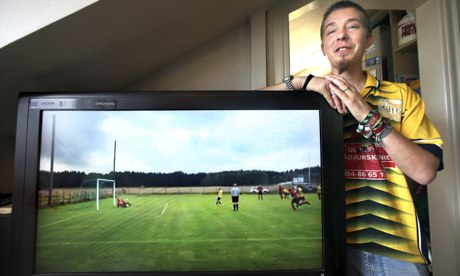 The chap you see above you is Andreas Engstrom, who still managed to score from the spot for Swedish sixth division side Ulvsby IF despite losing 99% six years ago due to the onset of a hereditary and incurable eye condition known as Leber’s disease.

Working as a train ticket inspector by day, amateur player Engstrom began to notice that his eyesight was deteriorating when he became increasingly unable to read the ticket stubs and several visits to the hospital later he was diagnosed with the disease, a genetic disorder that causes the optic nerves to gradually fail.

Just two months later, he was left with just 1% of his vision – leaving him unable to engage in his two main passions: driving and turning out for his beloved Ulvsby.

We’ll let the man himself take up his story, which he relayed to Swedish paper NWT last week:

“I was working as a train-ticket inspector when I noticed that my eyesight was getting worse and that I was struggling to do my job.

“It was only going in one direction and everything happened quickly. After several visits to the hospital I was told that I could have developed a rare eye disease. My dad came to the next appointment and it was then that I was told that I had the incurable disease.”

You could forgive the man for taking the news badly, but Engstrom’s loss of vision spurred him on.

After getting the diagnosis from the doctor, Engstrom turned up at training shortly after an explained to his Ulvsby team-mates what he was going through. He lost his eyesight, but continued to work for the club in several roles: official statistician, secretary, web editor and unofficial dressing room mascot.

As a show of thanks and solidarity, his team-mates then devised a plan that, should they ever be cruising in a game and win a late penalty, they would sub Engstrom onto the pitch and let him try to score one last goal for the club.

Six years on down the line, that day finally came last weekend with Ulvsby’s league game against Backhammar.

“As always we were struggling for players, so I put myself as a substitute and the lads promised that they would get a penalty and that I would take it. In the middle of the second half one of the players came to me and said he’d got a penalty. ‘Get the shirt on and take it,’ he told me.

“I got really nervous. One of the guys put the ball on the penalty spot but I went up and touched the ball to know exactly where it was. I could, somewhere, see a little bit of the posts and I aimed for the right post. The feeling was that I missed and that it went straight on, but then I heard the lads cheer.

“Afterwards the guys asked how I could be so cool to wait for the goalkeeper to make his move before I shot. I didn’t have a clue I did that!”

The match finished in a resounding 6-1 victory for Ulvsby but Andreas phoned his old man up after the game and pretended that he missed his penalty.

“I told him on the phone that I didn’t score this time either but then, in the evening, I got the video out and showed him. He started to cry. Both he and my mum know how much I want to play football ‘for real’. It was emotional.”

And here’s the very video in question…

POW! Right in the feelings!