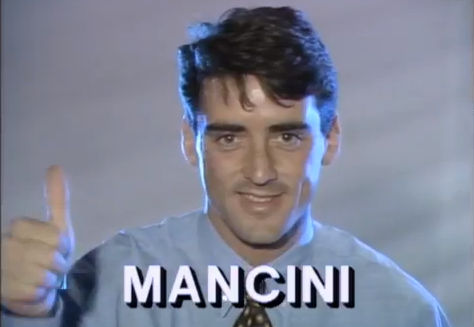 Back in 1993, long before the cashmere scarves, the impeccable overcoats and the silken silver hair, Roberto Mancini (along with his Italian national team cohorts Walter Zenga and Gigi Lentini) found himself pressed into becoming the ever-so-slightly awkward poster boy for the Sega Mega Drive – featuring in a series of television adverts alongside Italian comedian Jerry Cala.

Bob doesn’t really put a foot wrong but there’s a distinct emotional void behind the smile. Indeed, perhaps never has it been more apparent that the star of the commercial has little to no interest in the product he’s being paid handsomely to shill (skip to the 1:00 mark in the first video)…

(Timelessly brilliant spot from the chaps over at @SavileRogue)

Programming note: By the way folks, I (Chris) am going to be away this weekend on a family jaunt so Pies may be slightly quieter than usual over the course of Friday, Saturday and Sunday.

That said,  Alan is going to be filling in manfully and steadying the ship with his hand on the tiller and his eyes on the prize, so fear ye not, Pies will still be ticking over nicely!