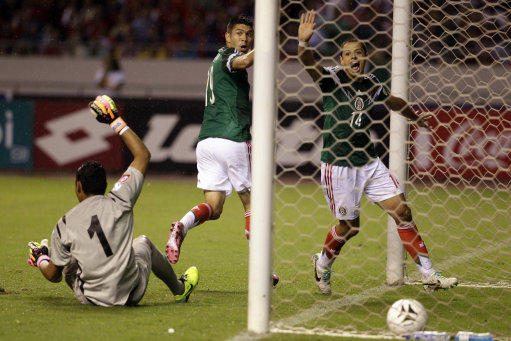 Javier Hernandez has played less than 85 league minutes for Manchester United so far this season and boy did it show last night when Chicharito was presented with a glorious chance to put Mexico 1-0 up against Costa Rica with just 17 minutes on the clock.

Unfortunately, it didn’t quite all go to plan for the pea-sized poacher…

Thankfully, Chicharito’s rust-crusted blunder didn’t prove too costly for Mexico as, though they went on to lose 2-1 to Costa Rica, El Tri had their World Cup qualification campaign saved from going down the toilet at the eleventh hour by none other than the USA national side.

The US were losing 1-2 to Panama in their final qualifier – a result which would’ve sent both them and their opponents on the night to Brazil, until Graham Zusi connected with a 92nd minute header to draw the States level and Aron Johannsson nabbed a dramatic winner in the final minute to secure a 3-2 win for the US and bump Panama back down below Mexico in the final standings, which duly cued #YoureWelcomeMexico to start trending on Twitter.

Indeed, thanks to the huge favour doled out to them by their upstairs neighbours, Mexico will now face New Zealand in a two-legged World Cup play-off against New Zealand next month.