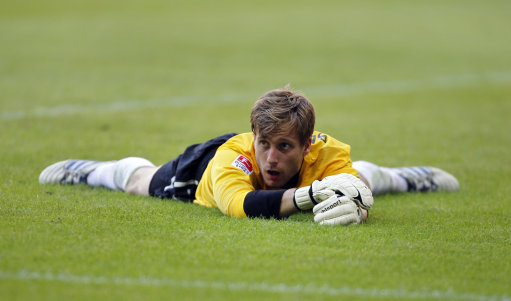 Someone obviously recently took delivery of the “Joe Hart Guide to Stupid, Jumpy, Needlessly Pro-Active Goalkeeping Decisions’ if Freiburg goalkeeper Oliver Baumann’s calamitous performance against Hamburg on Sunday afternoon was anything to go by.

Hamburg won the game 0-3 with the 23-year-old Freiburg ‘keeper dropping major clangers for all three goals: flying out of his area at a moment’s notice for the first two, only to stutter when it came to actually clearing the ball thus allowing Hamburg pair Max Beister and Pierre-Michel Lasogga to capitalise with the goal a-gaping each time.

Baumann then shored up his hat-trick on the hour mark, fumbling Beister’s shot directly into the path of Rafael van der Vaart who, by rights, should really write the Freiburg ‘keeper a little thank-you note for gifting him Hamburg’s third goal so generously…

A solid day’s work that leaves Freiburg second-bottom of the table, five points adrift of the dotted line.