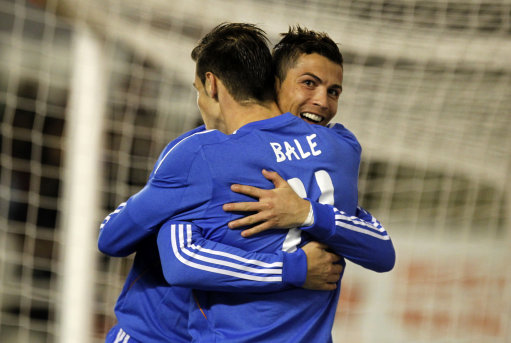 Real Madrid survived a late-ish bout of “Penalty Madness Coco Funtime Half-Hour” to edge a 2-3 victory over Rayo Vallecano at the weekend having previously raced into a 0-3 lead by the 50-minute mark, with Gareth Bale tying Rayo full-back Anaitz Arbilla up in knots on Madrid’s right flank in the process of providing a couple of assists for Cristiano Ronaldo.

Completely exhausted and emotional at the torrid evening he’s endured up to that point, Arbilla was subbed off shortly after Bale popped the ball through his legs on the touchline and raced into the box to set up Ronaldo for Madrid’s third of the evening and the poor, beleaguered left-back was visibly inconsolable when he got back to the bench, tears welling in his eyes as he pulled his jacket over his head and sulked for the remainder of the game…

You’ve got to feel for the guy, but you also can’t help but feel a little swell of pride on Bale’s behalf too. Literally making full-backs cry is a fairly impressive thing to have etched on any winger’s CV!