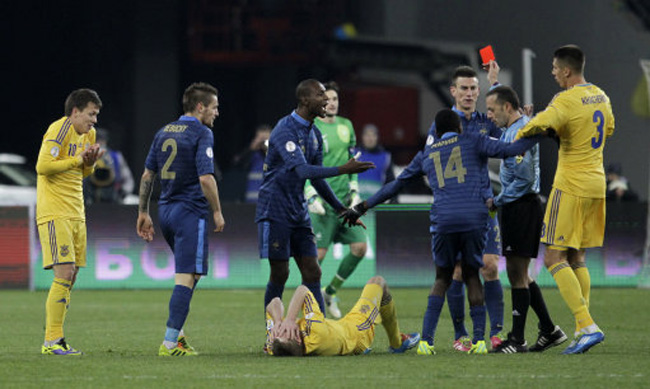 Les Bleus may well need another helping  ‘hand of Thierry’  if they are to dig themselves out of a very sticky situation. Didier Deschamps’ men were beaten 2-0 in Ukraine on Friday night, with the goals coming courtesy of Roman Zozulia,just after the hour-mark and then Andriy Yarmolenko, with a spot-kick.

France once against struggled to threaten their opponent’s goal throughout the night while Laurent Kocielny had a nightmare evening. The Arsenal man gave away the penalty for Ukraine’s second-goal after some poor defending before seeing red (along with Oleksandr Kucher) after raising his hands to Kucher late on.

France has been poor throughout the qualifiying campaign, with a dodgy defence and impotent frontline continually a problem. Now they have it all to do in Paris. And as for Koscielny, the defender’s penchant for picking up red cards and indeed, giving away penalties, is something he really needs to cut out of his game.