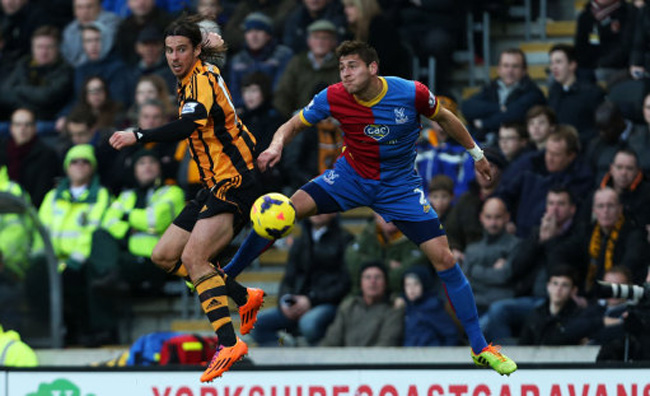 With new manager Tony Pulis looking on from the stands, Crystal Palace produced a battling performance to beat Hull at the KC Stadium (to be fair, the ‘Pulis Purrs’ headline is a tad over the top., but is sounded good!)

The Eagles were forced into an early substitution, with the injured Marouane Chamakh replaced by Cameron Jerome as the first-half remained goalless.

After the break, the home side pushed for a winner, with Yannick Sagbo, amongst others, going close before Palace’s Yannick Bolasie was sent off for a challenge of Jake Livermore. That dismissal came in the 78th minute as the game looked to be headed for a goalless draw. However, within three minutes, the visitors had scored the crucial goal, when Barry Bannan netted from close-range after a pass from sub Jerome.

The performance will have impressed the onlooking Pulis although there still remains a massive challenge in front of him. As for Steve Bruce, his Tigers are now just four points off the relegation zone.

Photos (only a handful for some reason – and Hull the next City of Culture and all!)