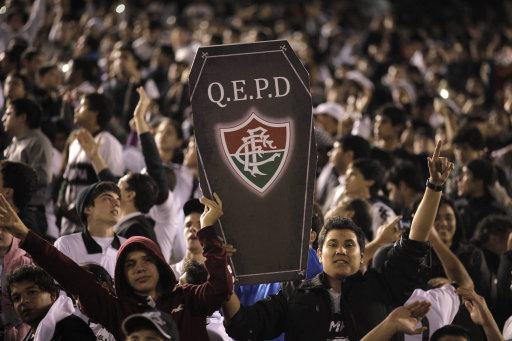 The Brazilian league season culminated in scenes of utter, utter carnage yesterday as reigning champions Fluminense were relegated from Serie A on the final day along with fellow ‘big club’ Vasco da Gama, whose game against Atletico Paranaense had to be delayed for just over an hour due to a serious bout of crowd violence in the terraces.

Despite winning the league in 2010 and 2012 and managing to win their final game of the season 2-1 against Coritiba, Fluminense became the first ever Brazilian side to be relegated as reigning champions when results elsewhere condemned them to the drop.

Elsewhere, Vasco were trounced 5-1 at home by Atletico PR though the game was suspended when fighting broke out in the stands just ten minutes after kick-off. Nothing is concrete as yet, but it’s being reported that several supporters from both sides were hospitalised (one in a coma) and one Atletico fan is reported to have been killed – this despite the game being held at a neutral venue in Joinsville after previous clashes between fans of the two clubs.

The skirmish was eventually broken up by riot police firing rubber bullets into the melee. Footage of the fighting is available, but BE WARNED: it ain’t pretty…

Can’t you just feel all that BRAZUCA in the air right now?