There were a couple of reasons that the kick-off of the Greek Cup semi-final second leg between PAOK and Olympiakos had to be delayed last night, with a huge pre-game flare display engulfing the pitch in thick, accrid smoke that took several minutes to clear.

However, along with the lack of visibility, kick-off had to be knocked back another couple of minutes after a clean-up operation was required when a gang of mischievous PAOK fans dumped a bucket of fish all over the Olympiakos subs bench… 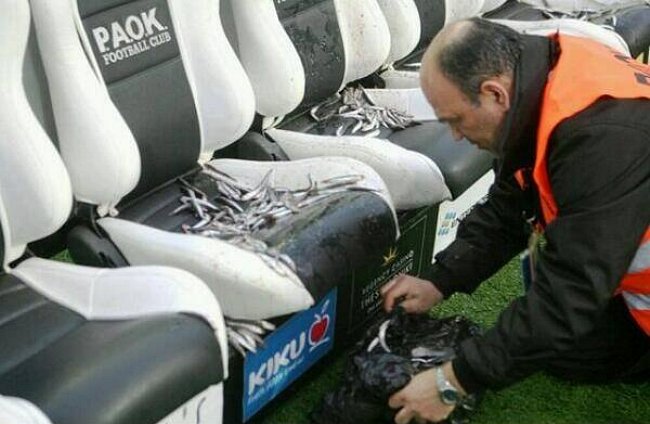 Indeed, after the fish incident, the referee ordered both sets of players back to the dressing room until he was given guarantees of their safety from PAOK’s security team.

The match was a predictably stormy affair, with multiple fights and skirmishes breaking out throughout – both sides ending the game reduced to ten men, with 15 minutes of stoppage time being played at the end of the second half to compensate for all the bad blood.

Oh, and PAOK won 1-0 to go through to the final on away goals.