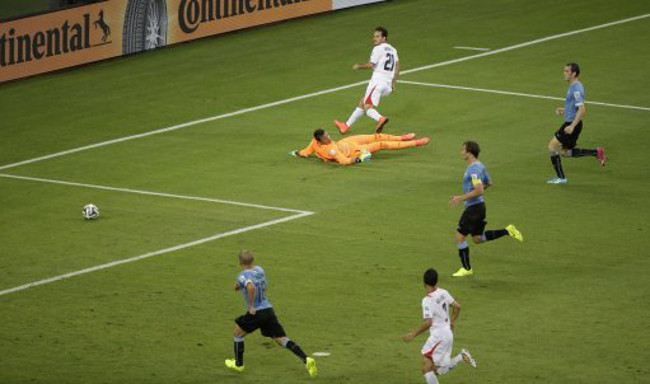 Following the Netherlands’s hammering of Spain on Friday, Costa Rica produced the second big shock of the tournament on Saturday by beating Uruguay 3-1.

La Celeste may have been without the injured Luis Suarez but they still boasted a formidable forward line with Edinson Cavani and 2010’s player of the tournament Diego Forlan. However, over the 90 minutes they were deservedly beaten by an energetic and well-organised Costa Rican side.

Cavani did but Uruguay ahead from the penalty box in the first-half, after Diego Lugano was fouled in the box. However, after the break Costa Rica were superb with Arsenal’s Joel Campbell outstanding. The fleet-footed attacker drew his side level  on 54 minutes before defender Oscar Duarte made it 2-0. Campbell then superbly set up sub Marcos Urena to make it 3-1.

That scoreline was well deserved as the Costa Ricans simply had too much pace and intelligence for a rather jaded-looking Uruguay side. Late on Maximiliano Pereira saw red for a kick at Campbell as the South Americans’ night went from bad to worse.