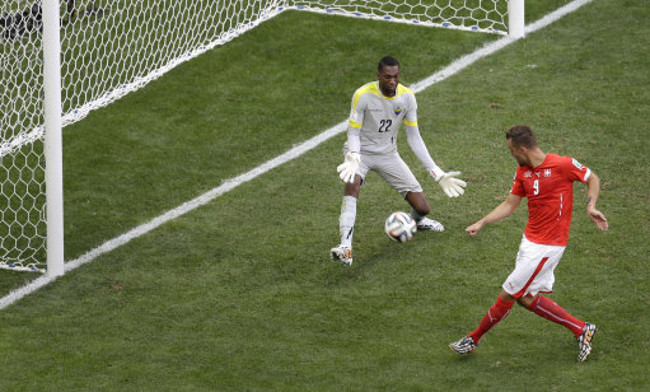 Switzerland came from a goal down to secure an opening win against Ecuador on Sunday. The South Americans opened the scoring when Enner Valencia headed home on 22 minutes and it was a deserved lead for Ecuador, with the Swiss struggling to threaten their opponents’ goal.

However, in Ottmar Hitzfeld Switzerland have a world-class coach and the former Bayern Munich and Borussia Dortmund tactician first brought on Admir Mehmedi at the break, with the Freiburg striker heading home after just 121 seconds of second-half action. The European side were now starting to dominate with Ecuador dropping deeper and deeper. Hitzfeld then sent on Haris Seferovic and with the game heading towards a draw, former West Ham man Valon Behrami won a vital tackle in his own box before running forward and evading a bad tackle. The ball then came out to Ricardo Rodriguez who crossed for Seferavic, with the Real Socieded sweeping home the winner from close-range.

Cirrently sixth in the FIFA rankings, Switzerland will be expected to qualify from their group, although they’ll need to play better for the full 90 minutes when they meet France.