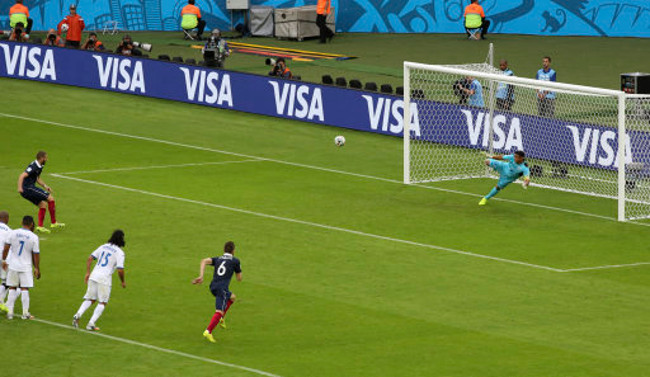 Karim Benzema netted a brace and had a big hand in another as France strolled to a comfortable 3-0 win against Honduras. However, despite the scoreline, Les Bleus had to endure some rather agricultural challenges from a Honduran side famed for their physical approach.

Former Spurs midfielder Wilson Palacios saw red just before half-time after he picked up a second yellow for barging into Paul Pogba in the Honduran box (his first came in another altercation with the Juve star). Benzema fired home to give the Europeans the lead at the break.

In the second-half, the bad challenges continued but the French eventually went 2-0 up when the first World Cup use of goal-line technology adjudged Honduran ‘keeper Noel Valladares to have spilled the ball over his own goal-line after a fierce Benzema drive. The Madrid man then made it 3-0 on 72 minutes against a Honduran side with little to offer going forward, even with 11 men.