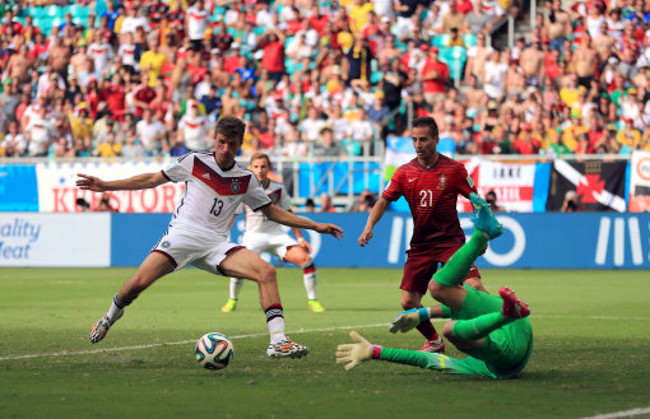 Jogi Loew’s much-fancied German side strolled to a thumping 4-0 win against Portugal on Monday as once again the Portuguese were let down by poor discipline.

Germany, with Thomas Müller, Mesut Ozil and Mario Goetze all combining superbly up front, went ahead after the latter was felled in the box. Müller put away the resulting penalty to give the Germans the lead. Both sides then had chances to score before Matts Hummels powered home from a corner on the half-hour mark. Then, to make matters worse for Paulo Bento’s side, that regular loon Pepe got himself sent off.

Müller had over-reacted to a hand-off by Pepe which made contact with the German’s face, but Pepe’s decision then to push his head against Müller’s was stupid and not surprisingly saw the referee brandishing a red card. With that the game was all but over.

Müller, outstanding throughout added a couple more as the Germans, looking like strong contenders for the overall competition, strolled to victory. As for (a rather subdued) Cristiano Ronaldo and co, they have it all to do.