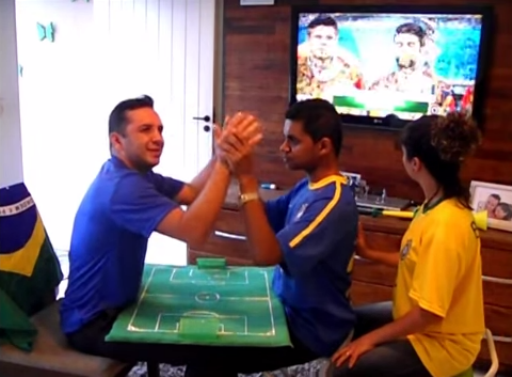 Thanks to the ingenuity and resourcefulness of a Brazilian sign language interpreter, a young football fan who was born deaf and blind was able to experience the thrill of “watching” a World Cup match for the first time.

Thankfully choosing Brazil-Croatia to test his new method rather than Nigeria-Iran, interpreter Helio Araujo Fonseca built a hand-made replica of a football pitch and used it to communicate with Carlos – indicating where the players were on the pitch and using sign language to “commentate” on the game as it unfolded – describing fouls, goals, players’ numbers, etc.

They also filmed the whole thing, and the joy on Carlos’ face when Brazil score at the end of the video is a truly heart-warming scene…