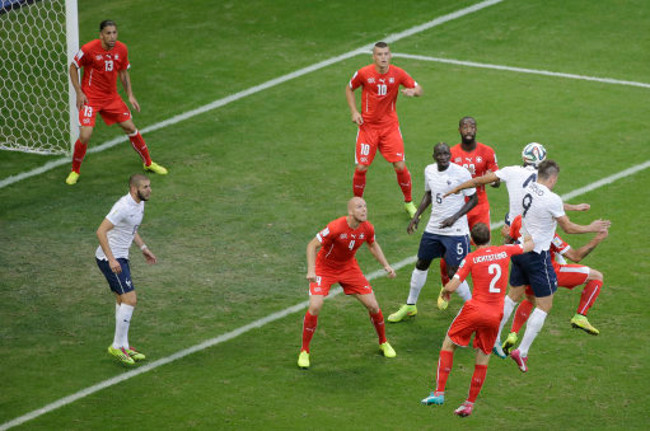 France produced a stunning performance against a disappointing Swiss side on Friday, with Les Bleus looking like serious contenders for the title.

Olivier Giroud netted a superb header to open the scoring early doors while the loss of centre-half Steve Von Bergen after an accidental kick in the face from the Arsenal striker was a blow to the Swiss. Indeed, with the ex-Arsenal pair or Johan Djourou and Philippe Senderos in central defence, the Swiss looked decidedly shaky.

Only a minute after Giroud’s opener, Blaise Matuidi* netted a second before Mathie Valbeuna made it 3-0 before the break. In the second-half the outstanding Karim Benzema (who missed a penalty) bagged a deserved goal before  Newcastle Moussa Sissoko got in on the act.

The Swiss did nab too late goal courtesy of Blerim Dzemaili and Granit Xhaka before Benzema’s almost bagged a brace courtesy of a superb effort, only for the final whistle to spoil the celebrations. However, overall it was scintillating display by a French side who look very different from the disorganised mess of 2010.