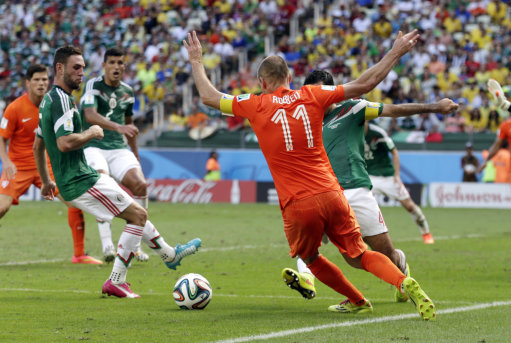 In which we are treated to some unbroadcast player-cam footage of Arjen Robben before, during and after the Dutch winger hurled himself to the ground in order to milk a last-minute penalty for Holland against Mexico.

As the footage shows, Robben first walks off after winning the penalty, noticeably unwilling to make eye contact with anybody while he goes looking for a ball…

According to a translation by Dutch website NOS, Dirk Kuyt then walks over and says: “You take it, you can be top scorer”.

Robben then offers it to Klaas-Jan Huntelaar, asking: “You want it?”

While Huntelaar is busy preparing to dispatch the penalty off-screen, Rafael Marquez wanders over to Robben and appears to make a “dive” gesture, which is shrugged off by the Dutchman.