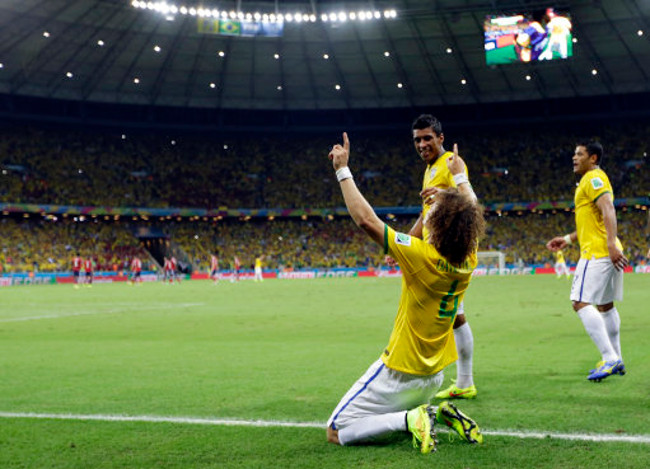 Well the feast of top-quality attacking football predicted by many ahead of this clash in Fortaleza didn’t really materialise. Instead, Brazil and Colombia played out a rather scrappy and niggly clash with neither side impressing overall.

The hosts’ captain Thiago Silva opened the scoring on seven minutes, bundling the ball home from a Neymar cross. After the goal, both sides pushed forward looking for the all important second goal, with both defences looking less than comfortable. However, rather than goals, it was fouls which started to pepper the game with referee Carlos Velasco Carballo seeming to have left his cards at home.

The second goal eventually came on 68 minutes, courtesy of a magnificent David Luiz thunderbolt. The game looked over at that stage but Colombia then started to create more chances against an increasingly panicky Brazil side and when sub Carlos Bacca was felled by Julio Cesar in the box, the outstanding James Rodriguez fired home his sixth goal of the tournament from the spot.

Los Cafeteros threw everything at the hosts goal but in the end, to the relief of the host nation, Brazil held on. However,  with captain Thiago Silva suspended for the semi-final against Germany, one wonders if passion and pride, rather than top quality football, will be enough to get the Brazilians through yet another round.