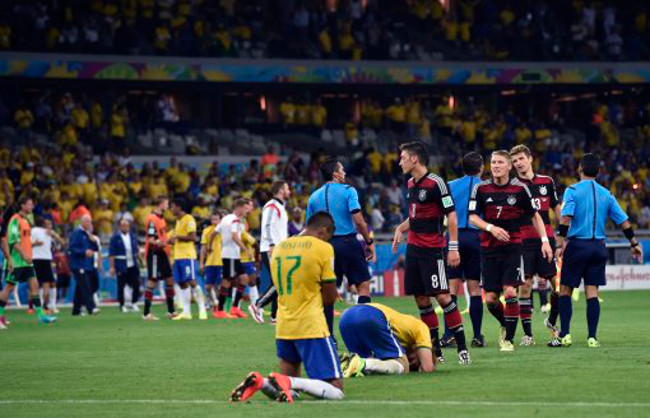 Well, how to encapsulate a bizarre and utterly unprecedented evening in Belo Horizonte? Without the injured Neymar and suspended captain Thiago Silva, the hosts crumbled in a way no-one would have imagined.

The outstanding Toni Kroos and sub Andre Schurrle bagged a brace each with Thomas Muller, Miroslav Klose (breaking Ronaldo’s World Cup goal record) and Sami Khedira also getting on the scoresheet but this was more than just a win, it was a massacre.

Phil Scolari’s side capitulated after Muller opened the scoring on 11 minutes as the home fans were stunned into quiter disbelief. Jogi Loew’s Germany, on the other hand, were superb, with the front three of Muller, Klose and Mesut Ozil too clever for the Brazilian backline.

Oscar did get a consolation goal late on but this was a result of historic significance and one which will live long in the memory. At the final whistle both fans and players of the host nation wept while the Germans looked forward to a final where they will surely be favourites. As for Brazil, many days of painful analysis lie ahead.