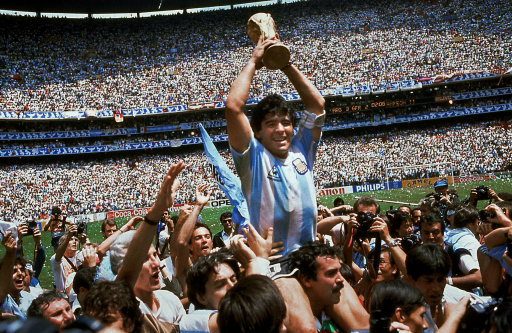 Having “single-handedly” (geddit?) won the World Cup for Argentina in Mexico a month or so previous, Diego Maradona was invited to play in the UNICEF World Stars exhibition game in front of 60,000 fans at the Rose Bowl in Pasadena, California as part of a team made up of players from North, Central and South America against a “Rest of the World XI”.

The American team were 0-2 down by the 60th minute thanks to goals from Terry Butcher and Paolo Rossi, but Maradona then popped into life – laying on an 81st-minute goal for Paraguay’s Roberto Cabanas before scoring himself seven minutes later to square things up and send the game to penalties.

Following a botched spot-kick from South Korea’s Park Chang-Sun, Maradona then scored what turned out to be the winning penalty – though it was his post-goal celebration which has since entered into the annals of footballing folklore.

Just keep an eye out for Maradona’s “friend” in the pale blue shirt, who wanders onto the pitch and, in full view of everyone, treats his buddy to a toot from a bag of what we’re legally obliged to refer to as “unidentified white powder” – not once, but twice…

In almost definitely unrelated circumstances, Diego Maradona later failed several high-profile drugs tests during the tail-end of his career due to cocaine abuse.