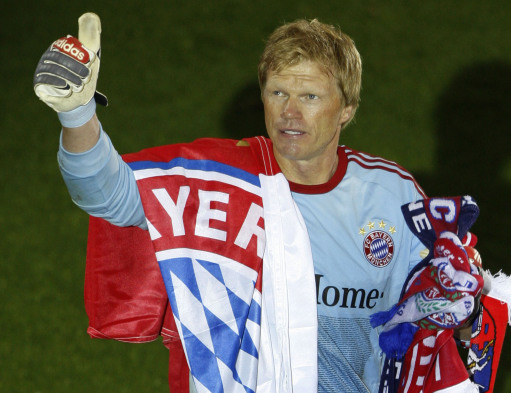 A bombastic, pugnacious and divisive figure throughout his long, distinguished goalkeeping career, it was only fitting that Oliver Kahn’s farewell substitution following his final appearance for Bayern Munich in 2008 took ten whole minutes to complete and included hugs, flags, a parade lap, a speech and a strategically-deployed opera singer to croon through “Time To Say Goodbye” while Kahn made his way (eventually) down the tunnel.

While not technically Kahn’s final “competitive” appearance for Munich – that, slightly randomly, came in front of 120,000 fans in Calcutta, India several months earlier – the legendary ‘keeper called time on his 20-year career (14 of which were spent at Bayern) with a farewell testimonial against the German national side, with all the fun and frolics cracking off when 39-year-old Kahn was ceremonially substituted off for his club understudy, Michael Rensing, in the 75th minute…