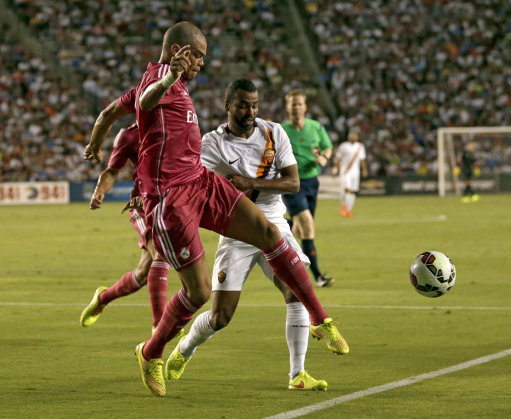 It may well have been a “friendly” on paper but there was certainly a fair degree of acrimony in the air when Roma met Real Madrid in Texas last night.

Ex-Barcelona midfielder Seydou Keita re-ignited an ongoing feud with Pepe which began back in their La Liga days, with the Real Madrid centre-back accused of calling the Mali international a “monkey” during a Clasico game back in August of 2011.

Obviously unwilling to forgive and/or forget, Keita made a point of ducking his pre-match handshake with Pepe, with hosilities then rising further when the Roma midfielder hurled an open water bottle at Pepe, who simply grinned malevolently back at his foe.

It is also being alleged by the fourth official on duty that Pepe spat at Keita during the altercation, though it doesn’t seem it was caught on camera…

After all the pre-match hubbub died down, Francesco Totti scored the only goal of the game to give Roma a 1-0 victory.