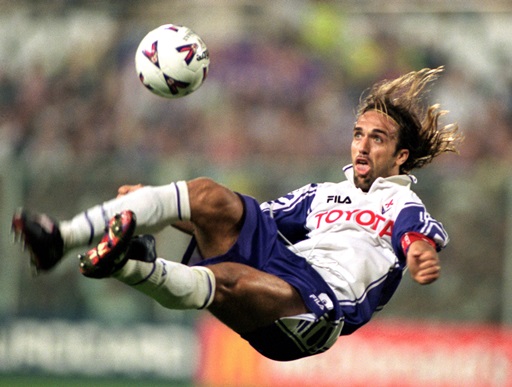 Former Argentina striker Gabriel Batistuta has revealed that his footballing career left him in so much pain that he seriously asked doctors to amputate both his legs after his retirement in 2005.

Speaking in an interview with TyC Sports, Batistuta admitted that at his lowest ebb he once decided to wet the bed in the middle of the night rather than having to go through the pain of walking across the landing to his bathroom.

In a desperate attempt to rid himself of the agony, Batistuta, now 45,  also admitted that he planned to have his legs removed and replaced with prosthetic blades.

I left football and overnight I couldn’t walk,” Batistuta said.

“I wet the bed even though the bathroom was only three meters away. It was 4am and I knew if I stood my ankle would kill me.

“I went to see Doctor Avanzi (a world-renowned specialist in Orthopaedic trauma) and told him to cut off my legs. He looked at me and told me I was crazy.

“I couldn’t bare it any longer. I can’t put in to words just how bad the pain was.”

Thankfully, Doctor Avanzi managed to talk Batistuta into a less extreme treatment for his ailment – having two screws surgically placed into his ankle to help alleviate the pain and support his movement.

“I chose the right leg (to be operated on) as the doctor couldn’t do both.

“I didn’t care. My problem is that I have no cartilage or tendons. My 86 kilos are supported by bones alone. That’s what generated the pain.

“Since I’ve had the screws put in, I’m much better now than I was three years ago.”

Here’s the interview in full, for those fluent in the Spanish vernacular…