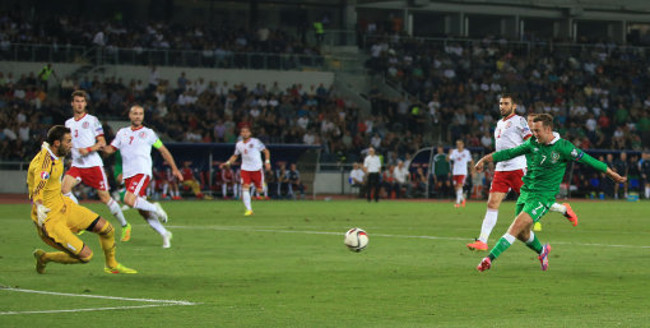 Everton’s Aiden McGeady was the hero for Martin O’Neill’s Irish side in Georgia on Sunday, with the Everton winger netting a match-winning brace.

McGeady’s opener, on 23 minutes, was the first goal of the whole Euro 2016 tournament but the hosts were soon level, courtesy of a superb solo effort from Tornike Okriashvili which left Ireland goalie  David Forde helpless.

The Irish continued to push for another goal but struggled to create enough decent chances although veteran striker Robbie Keane did go close. However, with the game headed for a draw, McGeady produced a moment of magic on 90 minutes, dragging the ball back before curling it beyond the Georgian ‘keeper and into the back of the net.

Not the greatest performance from O’Neill’s men but those hard-fought three points could prove very very precious in the months to come.