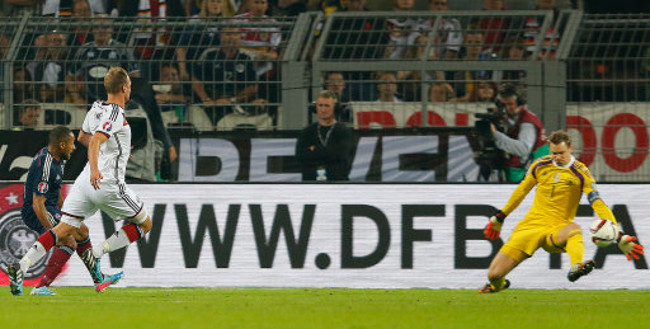 Thomas Muller netted a brace to give world champions Germany a hard-fought win against Scotland, although Gordon Strachan and co. will be buoyed by a courageous display in Dortmund.

The Germans, unsurprisingly, produced some superb football at times with Scotland ‘keeper David Marshall called into action on numerous occasions.  Indeed, the hosts dominated the first period, with Muller heading home on 18 minutes. However, the second-half introduction of Steven Fletcher gave the Scots a much-need boost up front and eventually they went level.

Watford winger Ikechi Anya bagged the equaliser on 66 minutes courtesy of a composed finish past Manuel Neuer as the Scots grew in confidence. The Germans, though, weren’t finished and after a corner wasn’t dealt with sufficiently by the Scottish backline, Muller netted his second of the game to secure the win for the home side.

Before the end Charlie Mulgrew saw red for a second bookable offence (one of a number of dodgy decisions made by the officials) while the frame of the goal denied Muller his hat-trick.

They may have come away from Dortmund without a point, but the Scots can take a lot of confidence from this very decent performance against the best side in the world.