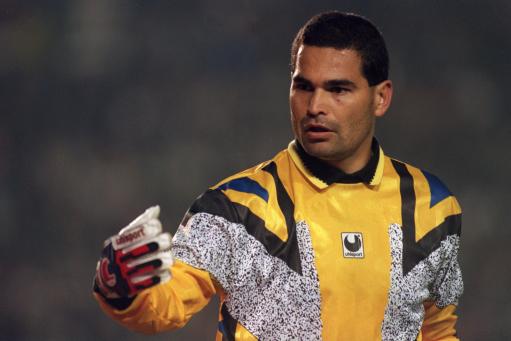 With 59 club goals and eight international goals to his name, ex-Paraguay and Velez Sarsfield stopper Chilavert held the world record for being the highest goal-scoring ‘keeper for many years – right up until Ceni surpassed him and subsequently ran away with it.

There are a few to pick from but perhaps Chilavert’s finest, or at least his most spectacular effort came in a Clausura game against River Plate in 1996.

With a Velez teammate still down after being fouled some 12 yards inside his own half, “El Buldog” Chilavert came bounding out of his goal and spontaneously thumped a Herculean effort over his opposite number, Mono Burgos (now Diego Simeone’s assistant at Atletico Madrid)…

Speaking to the press after the game, Chilavert said:

“Some players have scored from long distance, but it was usually by luck or chance.

“This was different. I saw that Burgos was outside the box, watching birds rather than concentrating on the game.

“So I started running frantically. As I arrived, I noticed the referee was in the way and shouted ‘Move!’ – luckily, he did!

“We won the game and I gave my shirt to the referee. He deserved for his reflexes!”