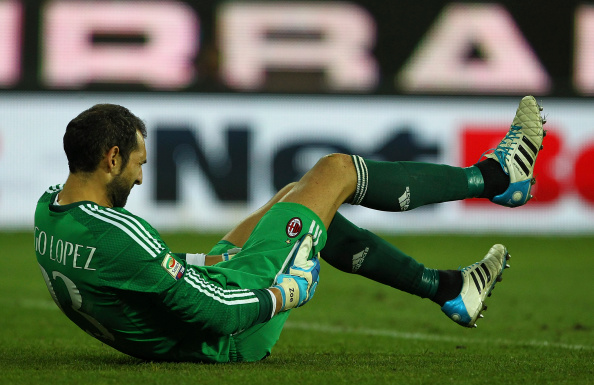 AC Milan have this afternoon confirmed that ‘keeper Diego Lopez is staring down the barrel of a two-week injury lay-off after twanging his hamstring in the process of conceding a calamitous own-goal during the 89th minute of the Rossoneri’s 4-5 away victory over Parma on Sunday evening.

With Mattia De Sciglio playing the ball back to relieve a bit of pressure, Lopez floundered as the pass trundled past him and into the back of the net to bring Parma to within one goal of Milan with minutes left to play…

However, with all the world assuming Lopez was merely faking a limp to save face, it would appear that the Spanish keeper’s injury was genuine after all – with Milan issuing the following statement via their official club site this very afternoon:

“[Lopez] suffered a right hamstring injury. He will have scans and his condition will be assessed for a couple of weeks.”

Fair enough, Chuck. We take it all back.