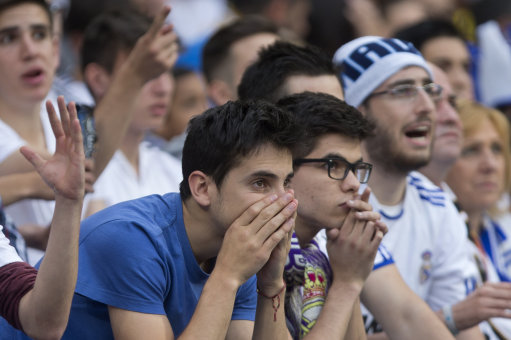 With Real Madrid suffering back-to-back defeats against Real Sociedad and Atletico Madrid in their last two fixtures, unrest is beginning to swell among their prissy, hyper-entitled fanbase, with several players – most notably Karim Benzema and (former saint) Iker Casillas – being heavily jeered during the Atletico loss.

It would also appear that the discontent has spread to Real’s training sessions.

According to the Daily Mail, both Raphael Varane and Toni Kroos were booed by fans after the team trained at Valdebebas yesterday – with disgruntled supporters reportedly shouting “W***er! Foreign sh*t!” at the German midfielder as he left Real’s training complex.

There was also an incident, captured by the cameras of Spanish television station Cuatro, wherein Gareth Bale had his car kicked by a couple of fans outside the ground after appearing to ignore an autograph request…

As well as the mithering in and around Valdebebas, Real Madrid ultras have hung a large number of anti-Florentino Perez banners from bridges, overpasses and the like around the city calling for the club’s president to be frog-marched out of the Bernabeu – presumably for selling Angel Di Maria and only spending £100million on replacing him this summer…

Once again, we’re only three games into the season.