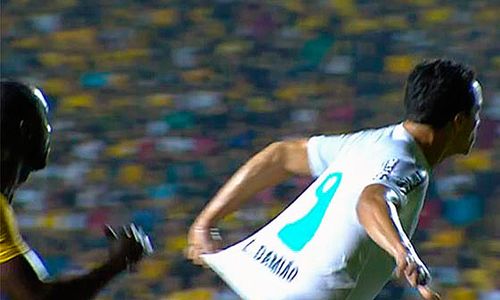 Milling around in the 18-yard box during Santos’ recent 3-0 loss to Criciuma in the Brazilian top flight, Damiao pulled on his own shirt in an attempt to dupe the referee into awarding his side a spot-kick…

Amazingly enough, Damiao’s ingenious ploy didn’t work and now, according to the AP, Brazil’s sports tribunal have announced that the striker has been charged for  “attempting to lead the referee into awarding his team a penalty”.

However, the Santos forward is still pleading his innocence, explaining to reporters after the game that his damp shirt had stuck to his back and that he was merely attempting to dislodge it by tugging it free.

Don’t worry Leandro, we believe you.