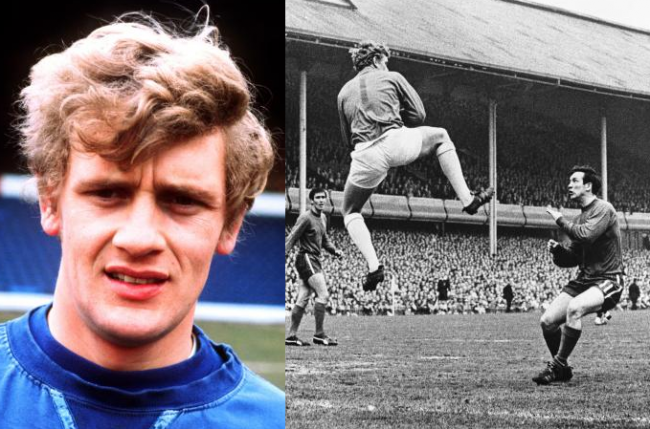 He may have looked like butter wouldn’t melt with his fresh(ish) face and wispy blonde curls, but Leeds goalkeeper Gary Sprake was just about as diabolical as the rest of the club’s late 1960s/early 1970s vintage.

Indeed, as can be seen in the photo above, Sprake had a nasty knack of coming to claim high balls with his studs purposefully raised at roughly neck-height to put strikers off challenging him.

By and large it worked like a charm and strikers left him well alone in the air, but when Arsenal’s Bobby Gould defied convention and attempted to out-jump the Leeds goalie to score in 1969, Sprake took umbrage and promptly punched him square in the face.

As was the style at the time, the referee wrote the belting off as mere sporting gentlemanly hijinks, booking both men despite Gould ending up on the floor with a partially dislocated jaw…

However, it would appear that Gould wasn’t quite as innocent as it first seemed, at least not according to Sprake’s version of events.

In his autobiography, Careless Hands, published in 2006, the former Wales ‘keeper recounted the incident thus:

“I caught a cross and as I fell Gould kick me in the privates very hard.”

“He then turned around and called me a f***ing Welsh so-and-so and I lost it and felled him with a sharp left that I think knocked out a few teeth.

“I was taking my jersey off because I thought I was walking.

“But the (Welsh) referee said ‘Everything will be okay, Gareth. I heard what he called you’.

“The next day in the papers there was a cartoon of me knocking out Henry Cooper with what had become by now my famous left hook.

“I’m not proud of it but then again a lot of people congratulated me for doing it. They still do now.”

Gould, an Englishman of course, went on to manage Wales – fairly poorly as it happens – hence the continued thanks from members of the Welsh public, we can only assume.