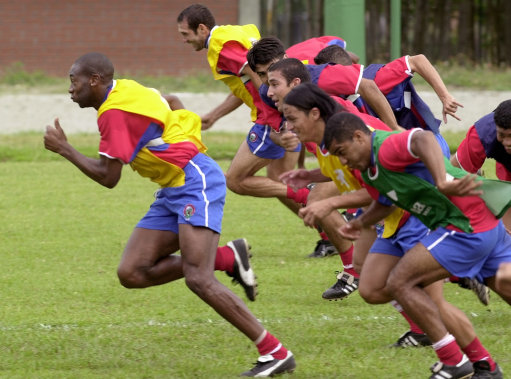 You could be forgiven for thinking that his stampeding slalom shuffle against Manchester United in 1997 was the only goal Paulo Wanchope ever scored given that everything else seems to have paled with time, but it’s fair to say the lanky striker did a steady trade during his prime.

Despite being about as unpredictable as his worryingly slack hip joints, Wanchope bowed out with a perfectly respectable domestic goal haul at the likes of Derby, West Ham and Man City, as well as ending his career as Costa Rica’s second highest ever goalscorer – sticking away an impressive 45 goals in the space of his 73 caps.

The Old Trafford yomp aside, here’s a goal which encapsulates all he was as a player – rubbery, temperamental chaos – scored (at the second attempt) for Costa Rica against Uruguay in the 2001 Copa America…

We think “gangly” is the word you’re looking for.