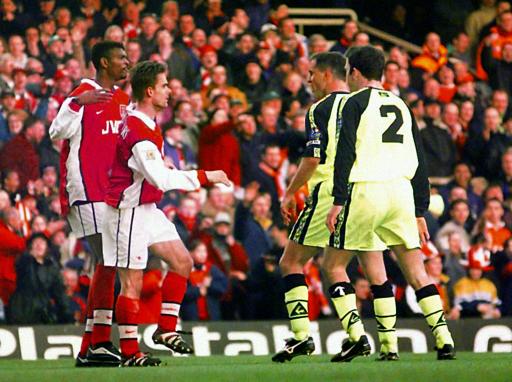 After making just 12 appearances (scoring once) for Inter Milan in three whole seasons at the Italian side, there were a few eyebrows raised quizzically when Arsenal spent the better part of £4.5million on Nwankwo Kanu – a former Nigerian youth prodigy with a well-known history of congenital heart issues – in February of 1999.

Given the nature of his style and his track record, the lanky 21-year-old Nigerian’s maiden appearance in England proved to be suitably bamboozling – coming as it did a couple of weeks later against Sheffield United in the fifth round of the FA Cup, on this very day some 16 years ago.

With the score level at 1-1 and with just 10 minutes left to play, Kanu – with a little help from his partner in crime, one Marc Overmars – sparked an infamously controversial incident which that eventually saw the entire tie being replayed from scratch.

Indeed, just 11 minutes into his debut, Kanu firmly introduced himself to English football by unwittingly (at least that was his excuse afterwards) failing to cotton on to the fact that he should have been returning the ball to the Blades following an injury-related throw-in.

Instead, he lolloped his way down the touchline and laid on a sitter for Overmars, who “instinctively” sprinted 25 yards at full bore to tap the winner home…

There was no obligation to return the ball and yadda yadda yadda but, come on – you just don’t do that man! Not cool!

To Arsenal’s credit, the club offered to replay the game at Highbury, which the Gunners went on to win 2-1 both fairly and/or squarely and all was well with the world again.