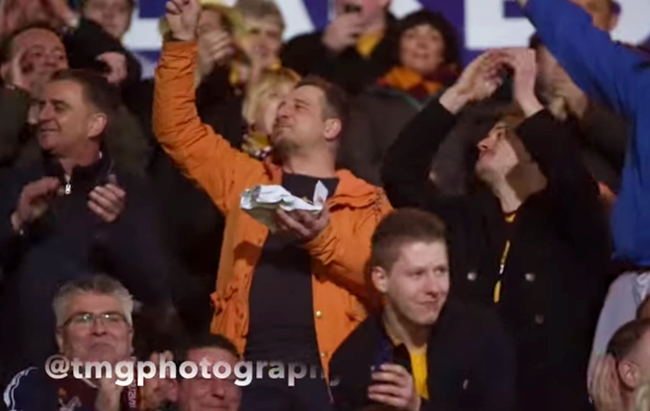 Right up our street, this one.

Safe to say, the Bradford fans were in fine song throughout Good Friday’s 3-0 away victory over Doncaster – a win which moved the Bantams to within just three points of the League One play-offs with seven games left to play.

The impressive performance was accompanied by high spirits in the away end at the Keepmoat, with an epic, three-part chant about one Bradford fan’s pie taking centre stage.

The ‘Ballad of the Pie’ began when fans noticed one bloke had got himself a snack – sparking fairly straightforward chants of “He’s eating pie!”.

Slightly later came the second verse, which concerned the lack of condiments accompanying said pie: “Has he got some sauce?”

Thankfully, all concerns were answered in the third verse – “He’s got some brown!” – after several sachets of HP were passed along the row to him…

There’s a certain theory that football chants are the last remaining example of proper folk music.

It’s little things like this that make us inclined to agree.

(Via Tom Gadd: @tmgphotography/Many thanks to Pies fan Simon for the tip-off)