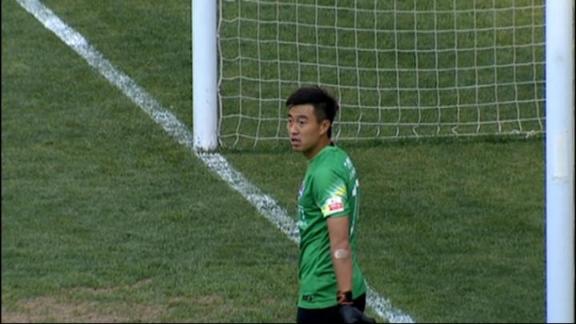 In which Chongqing Lifan goalkeeper Weijie Sui is left with a superb ‘whaddafuq?’ look on his face after conceding an 85th-minute equaliser while taking a swig from his water bottle.

With the goal temporarily vacated during the latter stages of Sunday’s Chinese Super League tie between the two sides, Liaoning forward Ding Haifeng springs a quick freekick and simply rolls the ball over the line while Sui had his back turned taking on liquids…

Rather amusingly, the Liaoning coach was also glugging from his water bottle at the time…

For the record, the game finished 1-1.

UPDATE: It has since emerged that Weijie Sui has been fined 50,000 yuan (approx. £5,240) for allowing an opponent to score while he wasn’t watching.

“I made a terrible mistake in Sunday’s game and let go a full three points. I won’t repeat the same mistake and will never lose concentration,” he told reporters after the match.

According to ITV Football, Weijie was later confronted by angry Lifan supporters at Liaonin’s Shenyang Airport and could also face suspension from his club.

All that for a sip of water!