The depressing fact of the matter is that today is only Lionel Messi’s 28th birthday – a man who has already broken more records and surpassed more milestones in football than is strictly decent.

To celebrate their little maestro turning the big two-eight, Barcelona have shared a swatch of previously unreleased footage of Messi back in his Cadete A (Barca’s top youth side) days.

After graduating up through the Infantil and Cadete B strings, Messi scored 37 goals in 30 matches for the Cadete A side – a ratio he’s pretty much kept going to this very day.

It’s funny, but we don’t remember the year that Lionel Messi was briefly played by a young John Terry… 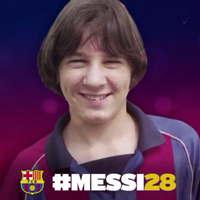