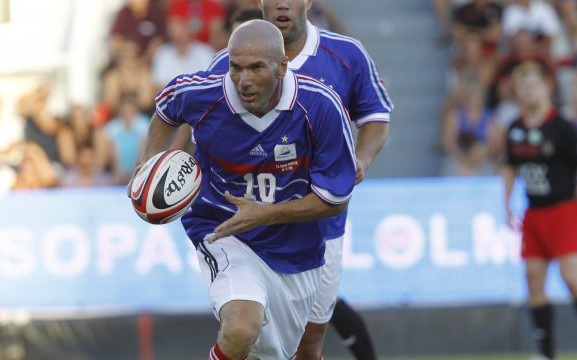 Just as they did two years ago, Toulon rugby club staged another bizarre football/rugby hybrid charity match yesterday evening, this time with the veterans of France’s 1998 World Cup-winning side providing the opposition.

The likes of Zinedine Zidane, Didier Deschamps, Robert Pires and Claude Makelele all reunited to turn out for Les Bleus XI, with Zizou even coming down an acute case of white line fever at one point, going over for an impressive solo try that began in his own half…

Unsurprisingly, France emerged as 6-3 victors in the first half (football) while Toulon eased to a 30-20 victory in the second (rugby).

The actual overall score is anybody’s guess (33-26 to Toulon?) but suffice it to say, it was charity won on the day – with all proceeds going straight to Association de Pascal Olmeta.