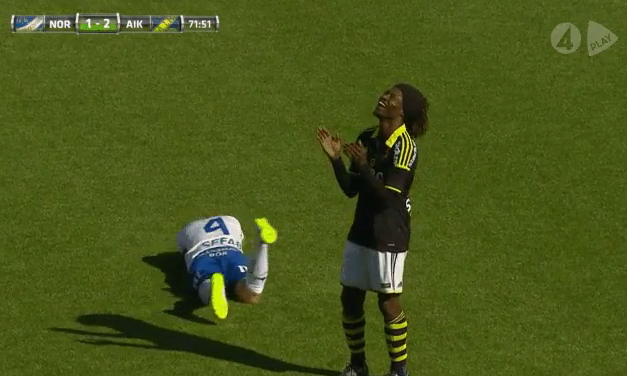 Thanks to Norrköping captain – we repeat, captain – Andrea Johanssen, the prevalence of pathetic diving in football may have just reached some kind of critical mass thanks to his woefully embarrassing escapades over the weekend.

As AIK striker Mohamed Bangura was innocently pointing up-field, Johanssen sidled up behind his victim, nudged his nose into Bangura’s outstretched arm and duly proceeded to collapse in mock-agony as if he’d been blunderbussed in the face at point blank range.

Bangura’s incredulous reaction, to be fair, was priceless…

Hilarious and all, but surely this kind of detestable conniving behaviour shouldn’t just be laughed off?

Not many things offend Pies on a moral level, but that was just reprehensible.

Please tell us we’re not alone in thinking Johanssen deserves to be banned for the foreseeable future?