Champions League winners Barcelona played out a cracking clash with Europa League holders Sevilla in Tbilisi on Tuesday night. A game full of fine free-kicks and some appalling defending would serve up a plethora of goals and produce a perfectly fitting end. 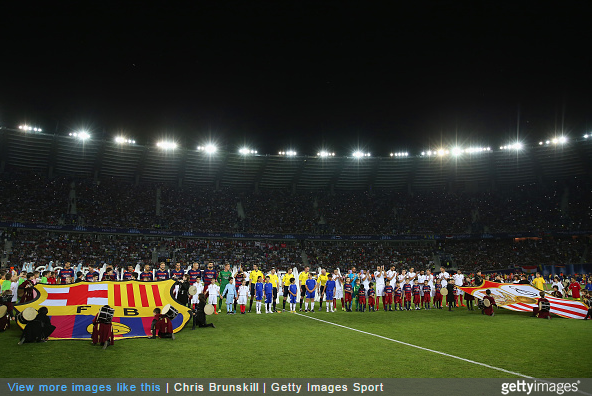 Midfielder Ever Banega, who missed a shoot-out spot-kick in the Copa America final this summer, gave Sevilla an early lead when he netted on three minutes, courtesy of an exquisite free-kick.

However, after that Barca totally dominated the first period, with the outstanding Lionel Messi bagging two free-kicks (on 7 and 15 mins).

Sevilla simply couldn’t live with the La Liga champions’ fluent football and just before the break, Rafinha made it 3-1 after some superb play from Luis Suarez.

A Luis Suarez goal soon after the re-start, after a horror pass from French defender Benoît Trémoulinas, looked to have sealed the deal for Luis Enrique’s side.

However, just before the hour-mark, former Arsenal star Jose Reyes got one back for Los Rojiblancos to keep the game alive.

With captain Andres Iniesta subbed off, the Catalans started to struggle and then, on 72 minutes, Sevilla made it 4-3. Kevin Gameiro was the scorer, firing home from the penalty spot after Jeremy Mathieu had pulled down Vitolo in the box.

With the wind in their sails and the likes of Messi drifting out of the action, Sevilla fancied a comeback and with nine minutes of normal time to play, subs Ciro Immobile and one-time Liverpool target Yevhen Konoplyanka combined, with the Ukrainian winger making it 4-4 from close-range.

Prior to the game, wingman Pedro reportedly told Barcelona that he wanted to leave his boyhood club, with Manchester United his likely destination. However, the 28-year-old was still in Luis Enrique’s plans for the night and was sent on for extra-time. The stage was set for the attacker to sign off with the Catalans in style, and on 115 minutes he did just that. After a Lionel Messi free-kick had initially been blocked, Pedro fired home from close-range to make it 5-4.

There was still time for Coke and Adil Rami to miss two great chances but ultimately Barcelona finished the game as 5-4 victors, with none other than Pedro the match-winner. What a cracker!