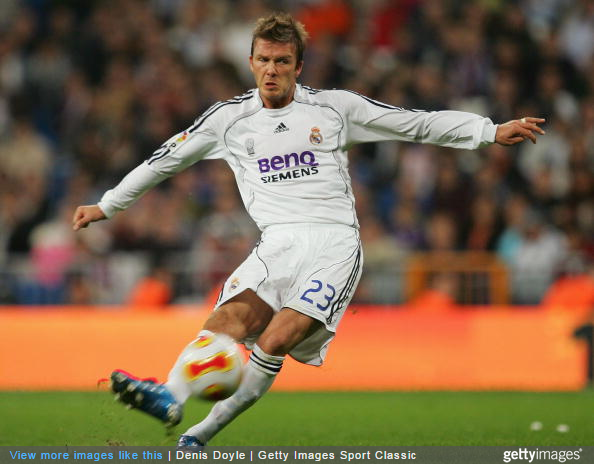 It’s been a while since we featured a Random Great Goal here on Pies and today seems like as good a day as any other to reboot the series.

We’re kicking back into life with a simple yet devastating beauty from David Beckham from back in his Real Madrid days, specifically a game against Sevilla in May of 2006 – the final day of the La Liga season.

Having eye-balled Roberto Carlos’ yawning great ball over the top, Becks plucks the ball out of the air with the cutest of first touches before slipping a finish past the advancing Sevilla ‘keeper to put Madrid 2-0 up with his second goal of the game.

Three touches and in. Not quite Route One, but certainly one of the low A-roads…

Despite Becks’ best efforts, Madrid went on to lose 4-3 in front of 42,000 fans at the Ramon Sanchez Pizjuan and thus washed up in second place in the table, some 12 whole points behind title winners Barcelona – thus effectively bringing the Galactico era to an end with a muffled fart.

(Many thanks to Pies fan Blagoj for the tip-off)

This way for loads more Random Great Goals on Pies