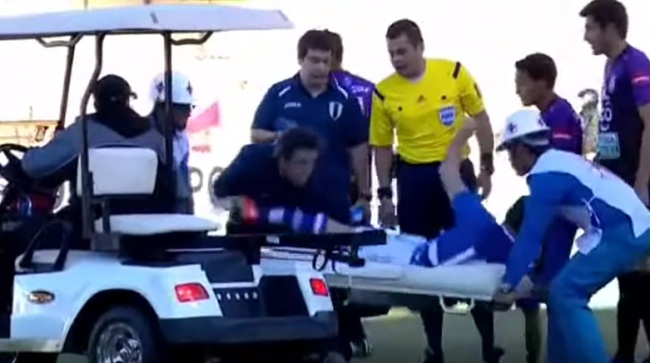 Having won the first leg of their Copa Sudamericana tie against Bolivia’s Real Potosi by a convincing 4-1 margin, you could be forgiven for thinking that Uruguayan side Juventud would be sitting pretty in the return leg last week.

That wasn’t the case, with Potosi scoring two goals before the hour mark to claw themselves right back into the tie at 4-3 on aggregate.

With their once-imperious lead suddenly looking decidedly precarious, Juventud adopted the dark arts in a brazen attempt to while the clock down.

Indeed, forward Matias Alonso went down with a phantom cramp as the game moved into the final stretch.

However, it would appear that the medical kart appeared far too quickly for his liking so, after being hauled onto the stretcher, Alonso decided to chuck himself back off again to eat up a few more precious seconds…

As shameless as it was, Alonso’s ridiculous ploy seemed to work as Juventud successfully hung on to win by both fair means and foul.

They will now face Emelec of Ecuador in the second round.