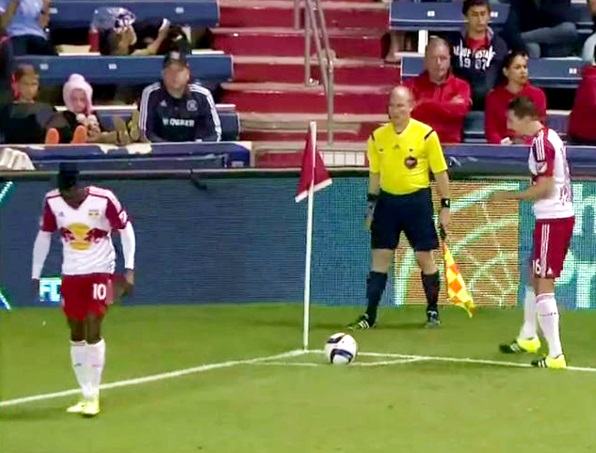 Not that it mattered in the end, but New York Red Bulls adopted the dark arts by pulling off the old ‘fake corner kick’ routine before scoring an equaliser against Chicago Fire in MLS last night.

The ruse began when winger Lloyd Sam went over to place the ball in the quadrant and, unbeknownst to the Fire defence, surruptitiously rolled the ball just over the line.

Sam’s accomplice Sacha Kljestan then ran over to take the kick and, after getting the okay from the linesman, proceeded to dribble the ball infield before setting up centre-back Ronald Zubar for a sitter inside the six-year box to make it 2-2…

There were protestations, but as Fire went on to score a 73rd-minute winner, the incident was rendered somewhat moot by the end of the evening.

However, the Professional Referee Organisation (PRO) were keen to state after the game that the goal should not have been allowed to stand, not because the devious shenanigans were unsportsmanlike but because Sam touched the ball twice during the set-up.

The technical details of the infringement were explained on the MLS website:

Citing Law 17 of the FIFA Laws of the Game which addresses corner kicks (page 53), a PRO official informed MLSsoccer.com on Wednesday night that the act of Sam touching the ball more than once is an offence punishable with an indirect free kick for the Fire.

The FIFA Law states that “if the kicker touches the ball again before it has touched another player, an indirect free kick is awarded to the opposing team.”

There you go kids. Bend the rules, don’t break ’em.